What Do You Call a Group of Frogs? People have a knack for coming up with strange and sometimes comical names for groups of animals.  I’m sure you’re wondering who came up with all of these and what other groups of animals, like frogs, might be called. So, what do you call a group of frogs?

So why was the name “army” settled on for a group of frogs?

In this article, we’re going to examine the origin of this name, as well as the reasons behind giving this name to groups of frogs.

Keep reading for the answers to all your questions on this topic!

Why is a Group of Frogs Called an Army? The reasoning behind this strange name for a group of frogs is that when large clusters of frogs are together in the same place, they tend to have the appearance of an army.

Frogs are typically known to form armies during the breeding season.

After it has rained, or if it’s particularly humid outside, large groups of male frogs will start to call for mates.

You’ve probably noticed that frogs will become very loud after it rains, croaking and calling throughout the night. This isn’t just for fun; this is to attract mates.

When it rains, there are many more spots for female frogs to lay their eggs in. Freshly fallen rain will form little puddles all over the place, perfect for a clutch of frog eggs to hatch in.

It will also increase the water levels of bodies of water that are already present, stirring up frogs to lay their eggs in the new water.

CAN YOU GUESS:  How long can frogs hold their breath underwater?

Frogs will often form mating groups, which may appear like clusters or little “armies” of frogs clinging to tree branches or sitting on the banks of ponds, lakes, or rivers. This is when you might think to yourself that they look an awful lot like a little army of frogs!

Variations of Naming for Groups of Frogs While the most common name for a group of frogs is “army,” there are also a couple of other names that have been used consistently for this same thing.

A group of frogs has also been called a “colony” or a “knot.”

The reasoning behind the first variation, colony, is that when frogs are gathered together in groups, they appear as a colony.

A colony is defined as “a community of animals or plants of one kind living close together or forming a physically connected structure.”

Because groups of frogs are usually mating with each other, the word colony makes a lot of sense here. They would be gathered together and physically connected throughout this process.

The terms “army” and “colony” are used much more frequently than “knot” when referring to groups of frogs, but “knot” has still seen some use here and there.

Definitions for the word knot include “a fastening made by tying a piece of string, rope, or something similar…” or “a tangled mass in something, such as hair.” This term, then, would make sense for a group of frogs or toads.

Just imagine all those frog legs and arms tangled together in a heap!

When bunched together in one spot, a group of frogs may have the appearance of being a “tangled mass.”

What Happens to the Army After it is Disassembled? At this point, we’ve already established the what and the why of the name we use to refer to a group of frogs.

A group of frogs, known as an army, colony, or knot, usually comes together in one place for mating and laying their spawn in fresh pools of water.

But what happens when the army is disassembled?

As soon as the frog’s spawn is laid safely in a pool of water to be later hatched, the army will separate and go their own ways once more.

Many of the frogs will leave the water searching for food while their spawn will stay behind in the water to hatch and grow.

Frogspawn will start as tiny tadpoles after hatching. Instead of having arms and legs like their parents, they will only have a small body with a tail to propel itself through the water in search of food.

As they eat more food, they will begin to change, growing arms and then legs. This will allow them to leave the water eventually, searching for new food sources and mates of their own.

YOU MAY WONDER:  Do Frogs Eat Bees?

And thus, more armies of frogs will be formed when the next mating period comes around. If you live in a humid and wet area, you might be able to spot an army of frogs the next time it rains. 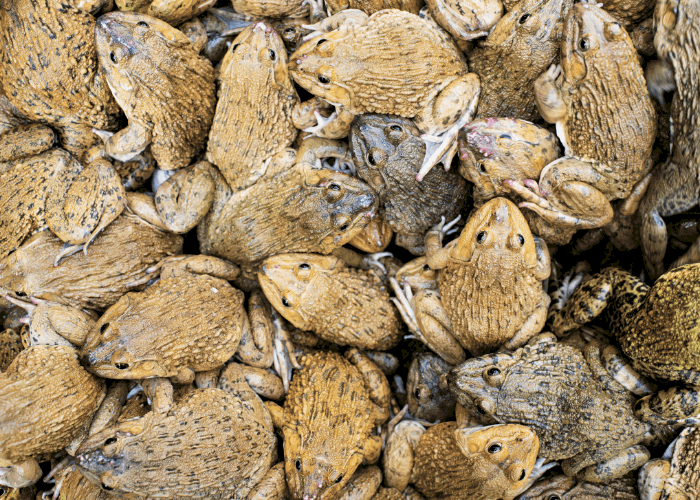 There are a lot of weird and crazy names people have come up with to call different groups of animals by, including frogs.

A group of frogs is most often known as an army, but they may also be a colony or a knot.

Armies of frogs will form during mating seasons. These mating seasons will usually be after heavy rainfall when many new puddles and freshwater bodies are formed, perfect for the frogs to lay their eggs in.

We hope the information we’ve outlined above has answered all your burning questions about what to call a group of frogs.