Home → Exotic Pets → AMPHIBIANS → What Does Frog Poop Look Like? Frogs can be fascinating to learn about for all frog enthusiasts out there, from their diets to their calls to where they like to live. But one area that may not be as researched as others is what a frog’s poop looks like. If you’ve got questions about this topic, we will address that today.

A frog’s poop looks like a brown, cylindrical substance that is often moist or wet. It can be found in whole sections or smaller pieces, and it may also be found as a pile of less solid material that is dark brown or black in color.

So, why does a frog’s poop look like this?

What contributes to its shape, color, and consistency?

In this article, we will address all these questions and more, so keep reading to get all the details you need about this topic.

How Do You Identify Frog Poop? 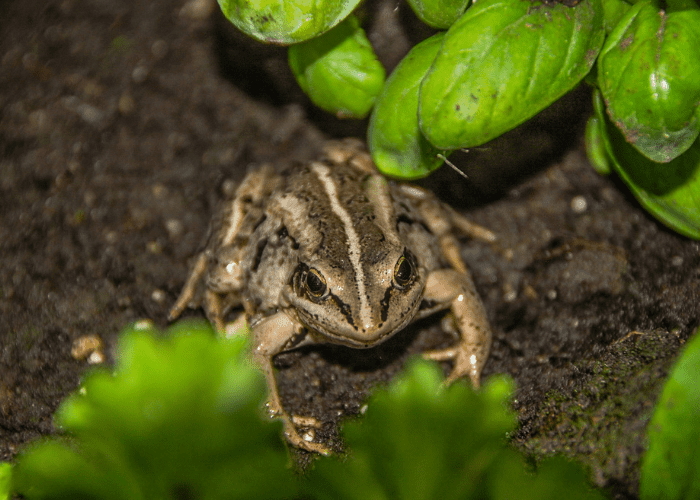 If you’ve found a sample of excrement in your living area, maybe in your yard or around the house, you may want to know what animal this poop belongs to.

Maybe you’d like to know if it belongs to a frog, signaling that you have frogs living nearby. So, how can you identify it?

Frog poop can be identified as a long solid piece of excrement that is slimy or moist and is dark brown or black in color.

Surprisingly, a frog’s poop can sometimes be the length of its body, so it doesn’t necessarily need to be small pieces like the kind that other animals excrete.

You may wonder why frog poop tends to be so large. This is because they eat a large amount of food compared to their body sizes.

They will often consume enough food such as insects to fill up their entire stomach areas, which are very large for frogs. Their food may even expand the size of their body, depending on how much they eat at one time.

Poop excreted after consuming such a large meal will often be almost just as large, which is why frog poop tends to be so much bigger than that of other animals their size. If you find a piece of frog poop around your home, you may wonder immediately whether or not it is dangerous to humans, and the fact is that it poses very little danger to humans.

However, even though a frog’s poop is not overtly dangerous to humans, you should still treat it cautiously. Poop from a frog can harbor pathogenic parasites and bacteria, some of which can cause harm to you if you touch it.

One of these disease-causing bacteria is the bacteria known as Salmonella, the pathogen responsible for food poisoning. If infected by Salmonella, you may experience severe flu-like symptoms, including vomiting, diarrhea, and fever.

Another potentially dangerous side effect of touching frog poop is the possibility of contracting pinworms.

Pinworms are a common parasite that attaches themselves to amphibians and humans, making you a prime target if you let it get near your mouth, nose, or eyes. This parasite is also responsible for more infections than other worm species.

Due to the possibility of infection from these sources and more, you should always thoroughly wash your hands after handling frog poop.

If a frog has excreted waste in your home, make sure to use an antibacterial disinfectant and some towel or rag to clean it up properly. Next, you may be wondering if a frog’s poop smells bad or not.

Just as with poop excreted from any animal, frog poop does have a smell, and some have said it has a smell reminiscent of dog poop and smells just as strongly as the poop from any other kind of pet.

To remedy the strong smell of their poop (if you have a pet frog), you should make sure to clean out their cages regularly. This will prevent the build-up of waste inside the cage and help alleviate the bad smells that accompany it.

Even if your frog’s poop smells particularly strong, you shouldn’t be worried. As long as a frog eats and poops regularly, you can rest assured that they are healthy.

If you notice a different color in their poop or blood in their stool, these may be signs of health issues and should be addressed by a trained vet as soon as possible.

How Often Do Frogs Poop? Adult frogs don’t actually need to poop very often and may even be able to go up to two weeks between every time they poop. Baby frogs, on the other hand, may poop daily. It really depends on the stage of life the frog is at, with frogs of some ages pooping more often than others.

The frequency at which frog poops may also be directly affected by how much they eat. A frog eating more food will inevitably need to poop more often than a frog eating less. If you’re a new owner of a pet frog or are just a frog enthusiast in general, it can be useful to know what a frog’s poop looks like.

Typically, a healthy frog’s poop will be long and cylindrical in shape, with a dark brown or almost black coloring. It will also be moist and shiny when fresh, but not when it’s had time to dry out.

A healthy adult frog does not poop very often, and it may only poop once every two weeks, depending on how much food it’s been eating recently. Baby frogs, however, will be pooping much more often, even daily.

We hope the information we’ve supplied you within this article has answered all your questions about frog poop and what it looks like.

For more fun facts, check out our other articles!