How Long Can Frogs Hold Their Breath? This is pretty amazing. Imagine holding your breath for 4 to 7 hours.

Let’s take a closer look at how frogs can accomplish this stunning feat, along with which species may be able to hold their breath longer or shorter.

Keep reading to have all your questions on this topic answered!

How Do Frogs Breathe? To fully understand how frogs can hold their breath for such sustained periods, let’s first examine how they breathe.

Because frogs are amphibians, they can breathe both air and water. Some specialized species of frogs spend their lives underwater and have lost the ability to breathe air.

These aquatic frogs rely on a set of gills to breathe water, much like tadpoles do before they grow lungs.

A group of frogs that breathe both air and water may be forced to hold their breath or come up to the surface if the water around them is low on oxygen. This can happen if the frog is swimming in stagnant water, like a pond or puddle with little to no water circulation.

So, when there is not enough oxygen present in the water around them, frogs will be required to hold their breath. That’s when having lungs comes in handy.

Frogs can stay underwater for a long time because they have developed a special kind of breathing called cutaneous breathing.

This unique way of breathing allows them to absorb dissolved oxygen through their skin, allowing them to stay underwater for a long time without having to come up for air.

However, this can sometimes be a bad thing. If there is too little oxygen in the water around them, the frog will start to suffocate unless it holds its breath.

This can be especially dangerous during long periods of hibernation when having sufficient oxygen levels is imperative. Many frog species have evolved lungs throughout their evolution, allowing them to breathe air while also breathing water when needed.

This is a massive plus for adaptability, but it can also mean trouble.

If a frogs’ lungs fill up with water, it will drown.

However, frogs are specially adapted to live in the water, so their chances of drowning are relatively low compared to other animal species.

Many frogs will come up to the water’s surface for more air to prevent themselves from drowning. Even though most frog species do this, some don’t have lungs and only breathe with cutaneous breathing.

One such species is the Bornean Flat-Headed frog, which breaths only through its skin.

Because of this unique adaptation, it never needs to come up for air and can drown! But if the oxygen levels in the water around it are too low, it can still suffocate.

Which Species of Frog Can Hold Their Breath the Longest? 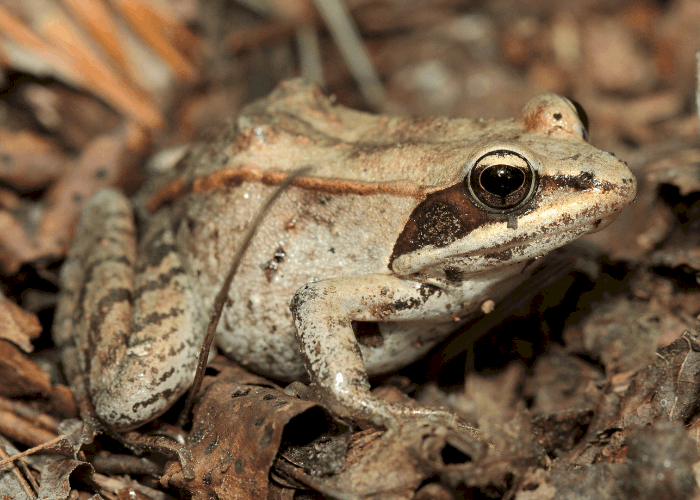 Many species of frogs are adapted to spend their entire lives underwater without ever needing to surface once.

Some of these frogs include the African Clawed Frog and the Western Clawed Frog, which spend all their time in the water without needing to venture upon long.

While frogs like these spend their whole lives in the water, they still need to surface occasionally to get air. They then will hold their breath for as long as they need to while hunting and mating underwater.

Some frog species will also hibernate through the winter or prolonged droughts, requiring them to stay under the water for long periods. When this happens, their respiration will slow down, allowing them to hold their breath for months at a time.

One such frog species is the Wood Frog, which holds its breath through the long winter months until spring.

Their respiration becomes so slow that they can hold their breath for this entire time while also surviving being frozen. Their blood produces a unique anti-freeze solution that will thaw them out in the springtime.

The Siberian wood frog, (Rana amurensis) was facilitated by a unique adaptation, the ability to survive extreme hypoxia — and probably anoxia — in waterbodies during overwintering.

In laboratory experiments the R. amurensis survived for up to 97 days in hermetically sealed containers with water that contained less than 0.2 mg/L oxygen at temperatures of 2–3 °C, retaining the ability to respond to external stimuli. Some species of frogs have adapted to breathe only through their skin, allowing them to stay underwater their entire lives. Others have evolved to hibernate in freezing water for months without coming up for air once.

The tiny amphibian, the frog, accomplishes these amazing feats. Starting as just a little tadpole with no arms or legs, they grow into a creature adapted perfectly for water and land.

We hope the information we’ve outlined in this article has answered all your questions about how long frogs can hold their breath.

For all other questions about frogs, check out some of our other articles below: