This got me wondering whether guinea pigs can eat slightly acidic foods, such as tomatoes.

So, can guinea pigs eat tomatoes?

Guinea pigs can eat tomato skin, seeds, and flesh, but the green stalks and vines should be avoided because they’re poisonous to guinea pigs.

Guinea pigs can eat tomatoes in moderation, which means 2-3 times a week. Please don’t give them too much because tomatoes are acidic and cause mouth sores.

Looking at whether guinea pigs can eat tomatoes got me wondering about what other acidic fruits and vegetables you can feed to guinea pigs and what are acceptable quantities of these. After giving my guinea pigs tomatoes for the first time, I was surprised by how much they liked them.

One of my guinea pigs even took their share off to another part of the cage so they could eat it without being interrupted.

This should give you some indication of how popular tomatoes are with guinea pigs.

I found that cherry tomatoes are the best because they’re easiest to portion control when it comes to portion size.

One cherry tomato per guinea pig is a good-sized portion, so use this as your guideline. If you’re using large tomatoes, make sure you cut them into smaller pieces for better portion control.

It’s up to you whether you decide to cut the cherry tomatoes in half for your guinea pigs. I’ve tried both and found it doesn’t make too much difference.

Although the skin on a tomato isn’t thick, leaving them whole does give your guinea pigs something to work at, more so than if they have pieces.

A benefit of cutting them in half is that it gives you a chance to remove the water inside of a tomato.

While this won’t necessarily cause any issues for your guinea pig’s digestion, too much of the acidic and watery inside part of a tomato can lead to an upset stomach.

I’ve tried giving my guinea pigs tomatoes both with and without the innards, and they don’t seem to mind much either way.

The most important thing to remember with feeding your guinea pigs tomatoes is never to give them the vine or stalks because these parts are poisonous.

I’ve never tried giving my guinea pigs tomato stalks, but I imagine they would eat them given a chance. So make sure you permanently remove them, as the last thing you want is a sick guinea pig.

As with all fruit and vegetables, make sure you wash the tomatoes thoroughly before giving them to your guinea pigs.

Tomatoes are sprayed with pesticides, and while we’re slightly more tolerant to these chemicals, they can be very dangerous for a small guinea pig.

Also, make sure you remove any uneaten tomatoes after a few hours because they can be a breeding ground for bacteria and flies. You may have found that if you overeat acidic food, it can give you heartburn.

While researching this topic, the thought crossed my mind about whether this is also a problem for guinea pigs and whether you need to control the number of acidic foods you give them.

While I couldn’t find any information on whether guinea pigs can get heartburn (which I think is unlikely), I did find out some exciting information about feeding them acidic foods.

The most common source of acidic food that you’ll give your guinea pigs is likely going to be citrus fruit, such as oranges, tangerines, clementines, and so on.

Guinea pigs don’t produce their vitamin C and need plenty of it in their diet. And, as we all know, citrus fruit is an excellent source of vitamin C.

However, the acidity of these fruits means you should limit feeding to once or twice a week.

Too much, and your guinea pigs will develop sores around their mouth from the citric acid, which is quite painful and isn’t treatable.

Unlike people, guinea pigs can’t tell you the problem is there, so it’s best to avoid it happening in the first place.

The other thing to consider about these acidic fruits, and to a lesser extent tomato, is the high sugar content.

Guinea pigs are particularly prone to obesity, so you should limit the amount of sugar in their diet. It’s much better to source their vitamin C from vegetables, which I’ll discuss below, or supplement drops in their water.

Because acidity levels can be a problem for guinea pigs, it’s best to avoid acidic fruits, such as lemons and grapefruit.

These will lead to both mouth sores and upset stomachs, so avoid them altogether. Oranges are about the limit when it comes to acidity, and if you’re ever in doubt, avoid something altogether.

What are good sources of vitamin C for guinea pigs? 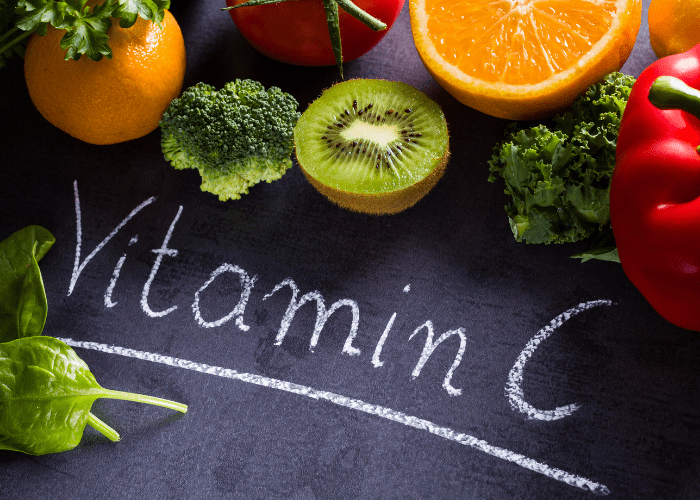 Considering guinea pigs need around 30mg of vitamin C every day, knowing the best fruits and vegetables to feed them is good.

However, I’ve also found that in the quantities you can feed a guinea pig, it’s difficult to give them the right amount of vitamin C, so it’s worth having supplement tablets on hand too.

Here are some of the best fruits and vegetables to give for vitamin C:

Although these are all good sources of vitamin C for your guinea pig, you should avoid overfeeding their vegetables such as kale, spinach, and cauliflower.

Kale and spinach have high levels of iron, which can be damaging to your guinea pigs. Cauliflower is an issue because it can cause bloating. However, you can still feed these vegetables once or twice a week.

As I mentioned above, be sparing with the amount of fruit you give because it’s high in sugar.

Fruit should be given more sparingly than vegetables, and I only usually give fruit as a treat once or twice a week, whereas some leafy greens I provide every day.

It’s also worth knowing that most guinea pig pellets have vitamin C in them, but it’s quite a volatile vitamin and so breaks down over time.

To combat this, keep your pellets in a cool, dry place, but expect there to be some deterioration of nutrients after a few weeks.

What foods are dangerous for guinea pigs? Tomato vines and stalks are poisonous to guinea pigs and can quickly lead to illness.

This is because there are compounds in the vines in such high concentration that your guinea pig will essentially overdose on them, which no one wants.

There are other vegetables that you should avoid too, including:

This should also include all parts of the potato plant, but anything green on a potato is poisonous to a guinea pig. I tend to avoid feeding them potatoes altogether because nothing is beneficial to guinea pigs.

Iceberg has very high water content and so can lead to upset stomachs. Also, like potatoes, there’s very little nutrition in iceberg lettuce, so avoid it altogether.

These contain toxins that will be damaging to your guinea pig. This point goes for pretty much any fruit or vegetable. In general, things are better to be overripe than under-ripe.

It might be tempting to give your guinea pigs some leftover cooked veg. However, you shouldn’t because guinea pigs can’t process it once it’s been cooked, and it’ll likely lead to constipation.

Guinea pigs love dandelion leaves and grass but avoid the temptation to give them anything from the garden simply because it’s green. There are plenty of very harmful garden plants, so err on the side of caution.

Can guinea pigs eat regular tomatoes? Guinea pigs can eat all kinds of tomatoes, but if you’re giving them large ones, then I’d recommend scooping out the inside first, as this can lead to upset stomachs.

Can guinea pigs eat carrots? Yes, guinea pigs love carrots, but their high sugar levels mean you should be sparing with how much you give them. Guinea pigs can eat the whole carrot, including the peel.

Can guinea pigs eat cucumber daily? Although guinea pigs love eating cucumber, and they’re generally quite good for them, avoid daily feeding because their high water content can lead to diarrhea. I recommend two or three times a week as a good number. Not only can guinea pigs eat tomato, but I’ve found that they love it

However, make sure you avoid feeding them anything green from tomato and make sure they’re always appropriately washed.

Also, be careful with how much acidic food you give your adorable guinea pig because it can lead to stomach issues.