Home → Exotic Pets → AMPHIBIANS → Can Axolotls Live With Other Axolotls?

Can Axolotls Live With Other Axolotls? What could be better than owning an Axolotl? Well, depending on who you ask, the answer could be two Axolotl. But can Axolotls live with other Axolotls happily, or would there be problems?

Axolotls can live with other Axolotls in the same tank if a couple of conditions are met. The first is that the tank is of adequate size and not too small. The second is that both Axolotls are approximately the same size. With these conditions met, there won’t be any issues.

Do Axolotls Normally Live with Other Axolotls? When young, Axolotls are many, as a cluster of eggs can yield about 300 eggs on average, and at most about 700! So, they frequently bump into each other without aggression in the wild.

However, if there are any that wind up being smaller than others or are from a younger clutch, they are in danger of being eaten by their larger counterparts. Scientists hypothesize that Axolotls are proficient in growing back limbs from cannibalism, making it a necessity.

This tendency toward cannibalism is why it’s important to give them ample space in a tank and why it’s a mistake to introduce a larger Axolotl to a smaller one.

Is Axolotl Better in Pairs? 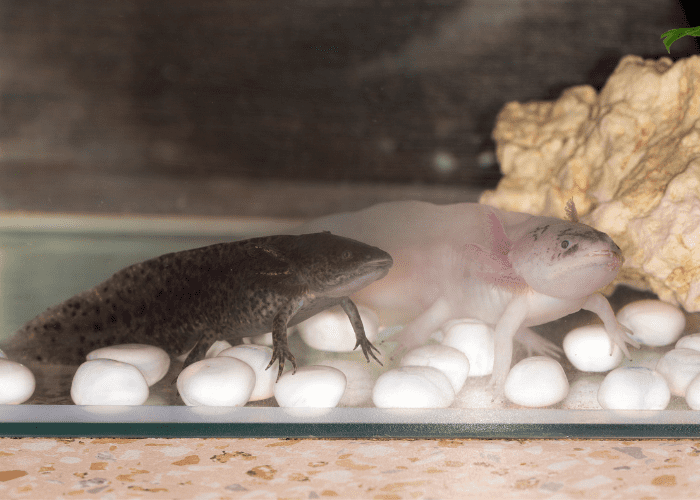 Axolotls aren’t necessarily better in pairs at all. They’re ok having company and are just fine without it.

Their cute appearance and ever-interested expression may pull on the heartstrings of owners, prompting them to think that the Axolotl needs a new buddy to play around with in the tank.  As social creatures, we find it difficult to imagine a solitary life as a happy life.

But that’s exactly what an Axolotl is- a solitary creature. When a friend is introduced into the glass-rimmed neighborhood, their typical reaction is often indifferent to a compatible companion.

So, are they better? Nope.

Are they worse off? Nope.

They’ll continue doing their own thing regardless of the company they keep. Mind you, every creature has its own personality. Though major attributes may be similar, they don’t all react in lockstep.

Some Axolotls may respond differently than the norm and display a more friendly welcome or, on the other end of the spectrum, show signs of annoyance- though the variances will be slight.

How many Axolotls Can Be in a Tank Together? The number of Axolotls that can coexist in a tank will depend on the size of the tank. The rule of thumb is no more than three per ten gallons. Also, it is recommended that there are ample hiding places available throughout the tank so they can have a slice of personal space.

Three per ten gallons will keep them happy with enough room to carve up the tank into their territories and enough places to grab some alone time. However, this doesn’t mean there won’t be an occasional nip, scuffle, or grudge match when they see fit.

Can You Keep Male and Female Axolotls Together?

Male and female Axolotls can be kept together or any combination as long as they are close in size. Male with males, females with females, or males with females. Until it’s mating time, they don’t care.

They will become rather competitive against one another when it’s time to breed if there are multiple males in the mix with a female. Consider that when thinking about how you’d like to populate your tank.

Do I Need a Bigger Tank for 2 Axolotls or More? As mentioned above, the rule of thumb is no more than three Axolotls per ten-gallon tank. One shy would be even better in the same sized tank.

If you want to own no more than two, don’t worry about your tank is too big if it’s a 20 or 30-gallon tank. If anything, they’ll appreciate the extra swimming room.

What Animals Can Live with Axolotl? 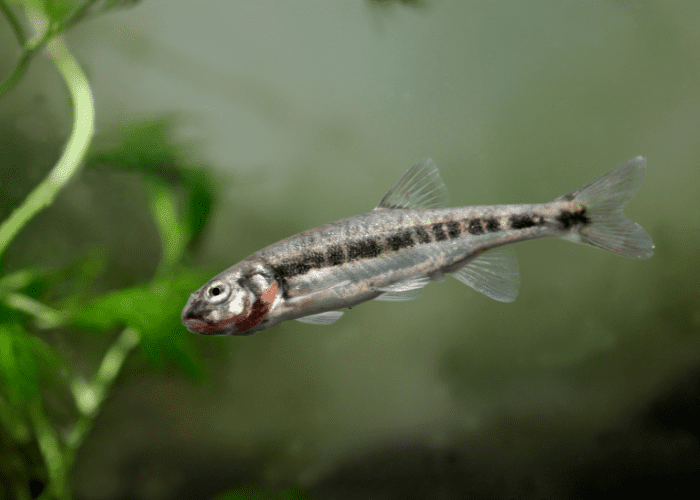 Axolotls, on the other hand, love it. A few popular fish are comfortable in the brackish environment and are also popular tank-mates with Axolotls.

Of the handful of fish or crustaceans compatible companions for the Axolotl, these two will not harm your pet. If anything, it’s best to ensure that the Axolotl is well fed, or either of these two may wind up on the menu!

There are others like the guppy, mini snails, and other small to mid-sized tank fish that could do fairly well but are not too good of an idea for several reasons. The Axolotl may harm itself by trying to consume them, catch parasites, or get nipped from time to time- particularly their gills.

How Do I Keep My Axolotl Happy? To keep Axolotls happy, they need a few requirements to be met chiefly- places to hide, turf to claim, a full belly, room temperature water, and a low-light environment. For this species, a company doesn’t mean happiness.

These five basic things will keep your Axolotl happy for a long time. If these things are provided, two or three (or however many) will spend their time doing Axolotl things rather than figuring out how to handle their encroaching neighbors. There are some good reasons to get multiple Axolotls. Maybe one that you have spends a lot of its time hiding away, and you’d like to double or triple your chances of interacting with one rather than waiting for one, in particular, to come out of hiding.

If you purchase a second or even a third Axolotl, it’s a good idea to invest in some tank dividers. Use these at first to ensure that there won’t be any issues from the get-go, and it will give them a chance to become more familiar with their new neighbor.

After a while, you can remove the dividers, and after having established who’s territory is who’s, there shouldn’t be any issues.