Home → Exotic Pets → BIRDS → Why are Crows and Ravens Associated with Death?

Why are Crows and Ravens Associated with Death? 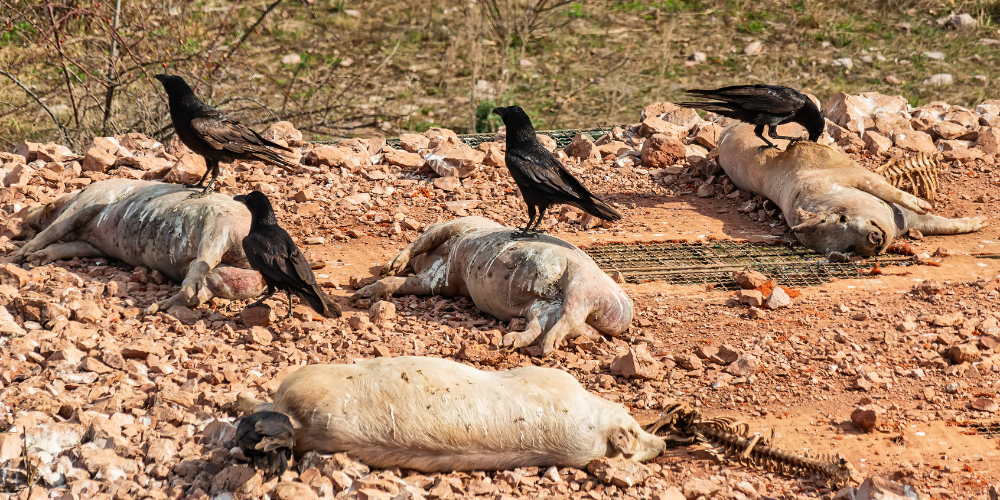 Ravens and Crows are two of the most intelligent and adaptable birds out there, known for their prominent black feathers and ability to flourish in various environments.

But, despite their remarkable capabilities, these birds have been unwilling representatives of death in various cultures worldwide. But why? How come crows and ravens are associated with death?

Ravens and crows have been associated with death for hundreds of years and are present in early cultures, often evident in their beliefs. Their prose and artwork depictions, regardless of the period, point to one theme- symbols of death or darkness.

This article will dive into their historical importance and mythological significance versus their real-world behaviors and biological traits.

Literary and cultural depictions that have taken part in shaping this view of these birds will also be discussed.

Crows and Ravens in Mythology Without crows and ravens (scientifically called the Corvids) in ancient myths and cultural stories, their reputation would likely be much different today.

Here are some examples mingled throughout mythology from different times and regions worldwide:

The Egyptian God Anubis’s mother was the goddess of death who was often accompanied by a crow, while the Greek god Apollo received messages from the realm of the dead via his pet raven.

Odin also had a couple of crows, Huginn and Muninn, that would bring him news of the goings on in the world, often associated with the news of the dead.

Meanwhile, in North America, natives thought of crows to be messengers of the dead, ushering messages between the spirit world and the living. They were also thought to be creatures whose purpose was to be a guide of sorts, ushering the dead into their afterlife. They are highly regarded for their intelligence and how diverse they are in living conditions. Their adaptability has caused them to thrive in almost every area of the planet (aside from the poles).

Because they are so diverse, they tend to hang around places that some may find strange- like the graveyards and cemeteries or other places where most wouldn’t dare tread.

Historically they’ve been recorded as being present on battlefields, taking advantage of the aftermath to grab an easy meal where corpses were present.

These birds are age-old opportunistic scavengers. As you might notice, when driving by roadkill in time to watch the flock of crows caw and flap away from their prize, then feed off the carcasses of dead animals.

This particular feeding habit has been a major contributor to their dark reputation. For many cultures, a raven feasting off the dead has painted a picture of the life and death cycle.

Crows and Ravens being Represented in Literature

Since there have been artistic and literary works, crows have represented darkness and death in one way or the other. It’s even stuck in common vernacular; these birds are often called “a murder of crows” or “an unkindness of ravens,” for example.

One of Edgar Allen Poe’s most famous poems is entitled “The Raven,” in which the bird represents the foreboding presence of death.

Shakespeare also used the raven as a symbol of death to represent Hamlett’s deceased father. In more modern work, the hit television series “Game of Thrones” used a form of raven symbolically as a harbinger of death.

Historically, there is no shortage of using crows in the same manner in all forms of artwork, such as in ancient Egyptian culture. Modern art still uses crows to represent all the darkness and mystery surrounding death.

Are Crows and Ravens Considered Pests? In many parts of the world, ravens and crows are considered pests. They have been known to damage crops like corn, sunflowers, fruits, pecans, and peanuts.

They are also a nuisance to people who own chickens, as some species of ravens or crows eat the chicks and eggs. The main offender in this regard is the House Crow.

Some people get annoyed at crows due to continuous banging on their rooftops. Most of the time, they do this to crack the shells of nuts they’ve likely stolen from someone’s crop.

On the other hand, they are beneficial in insect removal, so when the crop is a variety that doesn’t appeal to the crow, it will consume many insects known to cause damage to crops.

Through one nesting period, “a group of crows” can consume and remove over 40,000 insects and worms from a garden (or series of gardens).

How Intelligent are Ravens and Crows? This might surprise you, but ravens and crows are said to be comparable to chimpanzees and dolphins in their level of intelligence! This explains their capacity to hold a grudge for an extended time and their ability to pick up on tricks in captivity.

Crows are also smart enough to get into trouble around the house and are one of the few intelligent animals out there that will incorporate the use of tools to achieve something it’s trying to do.

Also, ravens and crows can become irritated or onery when bored or if they lack the proper amount of mental stimulation.

How do Crows and Ravens Fare in Captivity?

The information conflicts when you inquire whether crows make for a good pet. Some say their lives are shorter in captivity than in the wild; others say the exact opposite.

The truth likely lies between the two, widely depending on the bird’s health, conditions, diet, and treatment.

According to the Smithsonian’s National Zoo and Conservation Biology Institute, a Corvus Corax, or a common raven, can live up to 15 years in the wild.

When taken care of properly in captivity, they can zoom past those in the wild, living up to 50 years.

Are Crows or Ravens Good Pets? Whether crows make good pets or not hinges on a lot of factors. Their surrounding conditions, the level of the owner’s care, their diet, predisposed health issues, etc…

Generally, a bird lover could raise a crow successfully and have a unique relationship.

Because of their intelligence and need to be cognitively stimulated, crows are typically open to training and can quickly pick up on what’s being conveyed by their trainer. They can be trained to talk, do tricks, or perform tasks and jobs.

Crows even hold “funerals” for their dead mates or friends. Whether alone or in a group, they “mourn” or vigil over their deceased friend for many days.

Many experts believe these vigils are a way to learn about dangers. Viewing their fallen friend’s body, a crow can avoid similar deaths by learning about certain risks.

Please don’t make too many mistakes; it’s over once the crow gets a sour taste for you. There have been studies into whether or not ravens are capable of holding a grudge.

As it turns out, the research showed that ravens and crows could hold grudges for quite a while- up to two years in some cases.

Can I Own a Pet Crow or Raven? If you live in the United States, owning a crow or raven is illegal. Despite all the reasons contributing to these birds making for great pets, they are a local wild species.

Unless you’re licensed to rehabilitate wounded crows or ravens in the US, you are banned from owning these birds according to an act passed in 1916 called “The Migratory Bird Act.”

This act bans all US residents from owning any migratory birds that are native species to the United States.

The only way one can wind up owning a Crow or Raven as a pet in the US is by purchasing a species that is not native, such as African varieties like the white-necked raven or the European carrion crow, for a few examples. From ancient traditions and myths to modern arts and poetry, these birds have served as prevailing symbols of death, bad omens, foreboding, darkness, and the unfamiliar.

Crows and ravens are a bird of mystery, foreboding, harbingers, warning, and ultimately, death to those who cater to their reputation. However, there is so much more to this species of fowl than they are given credit for.

These are toted as one of the most intelligent bird breeds and are often wildly misunderstood.

Crows kept in captivity have been known to talk, mimicking human words like parrots. They are intelligent enough to figure out words and have a good enough memory to remember them.

So, there is more to the species than superstition, death, mystery, the unknown, and darkness. Beyond their dark black plumage is a black bird that has fascinated people since the days of oral tradition, before their depictions through paper and ink.