Bears are intimidating creatures that often inspire awe, wonder, and fear in those who come across them.

Some may be afraid that a bear will become aggressive and try to eat them, but the truth is they’re more likely to attack out of self-defense than hunger.

So, if they’re not inclined to eat humans in most cases, you may be wondering what they do like to eat, and if that includes other animals like the deer.

Bears eat deer. Bears are opportunistic omnivores and typically eat anything they can find, from leaves, berries, roots, nuts to carrion, fish, and fresh meat. Deer may make up a decent portion of a bear’s diet in certain circumstances.

Because deer are usually so alert, a bear may not find it easy to catch one. But if they do, you can be sure that they’ll chow down until there’s nothing left but bones and gristle.

So, what are the details surrounding the bear’s deer hunting habits?

It may seem like bears would eat deer quite often, but that’s not usually the case.

In today’s article, we’re going to take a closer look at all the details you need to know about bears eating deer.

How Often Do Bears Kill Deer? While it’s true that bears may sometimes kill and eat deer, it doesn’t happen nearly as often as people may think.

Bears are predators that favor scavenging over active hunting, and they prefer finding foods like berries, nuts, or fruits over actively hunting down prey.

They will even eat the carcasses of animals that other predators have left behind, or in some cases, will eat the remains of an animal killed on the road.

The frequency with which bears hunt prey actively varies depending on the species.

For example, the grizzly bear will hunt more often than the black bear, and black bears are less likely to attack full-grown deer and go after sleeping fawns or deer carcasses.

As opportunistic hunters, they would prefer an easy meal rather than one they have to fight for.

Other groups of bears like the grizzly bears tend to eat more meat than other species of bear. They are still very much omnivorous, as all bears are, but they are more disposed to hunting prey than scavenging.

Grizzlies actively hunt many animals, including elk, deer, moose, bison, and fish. They’re also not averse to attacking a full-grown animal and will have no issue killing a full-grown deer.

Brown bears are also known to eat deer in some circumstances, though like their black bear cousins, they prefer to prey on smaller animals than deer.

They often go after fawns or adolescent deer but rarely attack full-grown specimens. Their hunting habits are much more similar to the black bear than the grizzly.

What Type of Meat Do Bears Usually Eat? 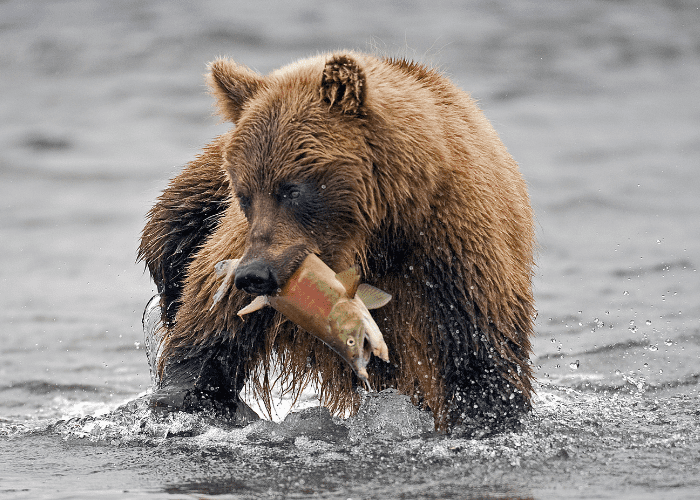 What a bear eats depends mainly on the time of year and what foods are available then, including what meat they eat. When food sources are typically depleted during winter, they hibernate until spring.

Because of their need to hibernate through the winter, bears will undergo a state of hyperphagia in the autumn, meaning they will have an insatiable desire to eat as much as they can in preparation for hibernation.

So, as we mentioned earlier, what bears eat during this time will depend mainly on the season and where they live. Because many plant-based food sources start to die in the fall, bears will typically turn to eat many more animals than they usually would.

Bears living in coastal areas are likely to hunt fish like salmon or trout. Bears that do not live close to a large body of water are much more likely to eat mammals like deer and livestock.

They may even resort to eating humans if the opportunity presents itself, although this typically only happens when a bear is desperate for food.

Living in freezing climates, Polar bears may subsist almost entirely on meat and typically eat animals like seals, arctic herbivores, or other predators.

How Do Bears Attack Deer? Predators hunt their prey in a lot of different ways. Some rely on speed to wear down their prey and catch them that way, while others rely entirely on catching them by surprise.

So how do bears hunt deer?

By examining deer carcasses, researchers have been able to tell precisely how bears like to attack deer.

Findings have shown that bears will typically attack a deer from behind, as evidence of claw marks and mauling on a deer’s flank have been found frequently.

To do this, they will clamp down on their neck or spine with their powerful jaws and break them that way. They will then break the deer’s spine or neck to deliver the killing blow.

The bear will then begin eating from the chest or hip regions of the deer, and they have been found to go directly for the entrails before other body parts. This is likely because the entrails are one of the most nutritious parts of their prey.

After they have eaten their fill, bears have been known to preserve the rest of the carcass so they can return to it later.

They do this by covering the carcass in piles of moss, leaves, and fallen branches. They may also bury the body under snow or leave it in running water later. Bears are formidable hunters, but most of them prefer to scavenge for food over hunting actively despite their hunting prowess.

However, they are still known to hunt prey when they need to and will make regular meals out of deer if they can.

They are more likely to attack deer in the fall when other food sources have become scarcer, and they are trying to stock up on fat for their upcoming hibernation. Although this is not as frequent as you may think, it still happens on a fairly regular basis.

We hope the information we’ve outlined for you in this article has answered all your questions about whether or not bears eat deer.

Remember to check out our other mammal articles for more interesting animal facts!